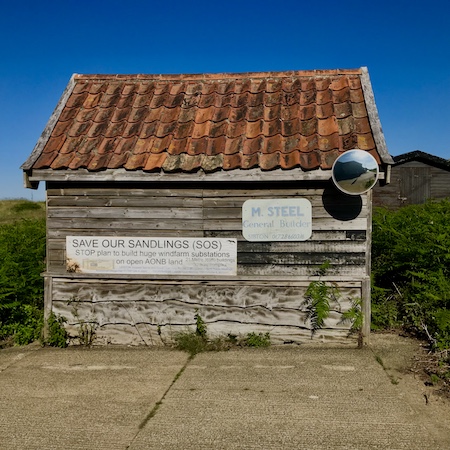 Travelled to Leiston in Suffolk to visit a museum and find out more about a pioneering doctor. On arriving, I discover a town that belies its conservative surroundings and has been, and probably still is, a pretty radical hub.

The road sign on entering Leiston has the byline A Fairtrade Town, which immediately warmed me to the place. It was once a thriving industrial hub, with the Garrett factory employing several hundred people before it closed in 1981, ‘with a full order book’ after being acquired by ‘an asset stripper’, according to a local man speaking to me. The Sizewell nuclear power plant is a few miles away besides a long sandy beach and now provides the majority of local employment along with the associated service companies and agriculture.

The town is quaint in places. The broad age range of people on the streets, from young boys riding their bikes to those of retirement age, all appearing relaxed. There is a fine selection of shops, including a good vegetarian cafe, Simply Delicious, where an excellent lunch was a reasonable £4.50.

My attraction to Leiston was The Long Shop Museum and to find out more about Suffolk’s industrial base and the life of Elizabeth Garrett, the country’s first registered female doctor. Beside the museum, the beautiful surrounding countryside, beaches and the power station are the main visitor attractions.

What was striking on driving and walking around the town was the amount of posters protesting against various schemes; from ‘No Wind Farm’ to ‘No Sizewell Worker Accommodation’. Researching a little deeper Leiston has a bit of a reputation for resisting convention. As well as Elizabeth Garrett and the campaign to create the museum, Leiston is also “famous as the home of the Summerhill School, founded by A.S. Neill in the 1920s as the first major “free school” – referring to freedom in education.” (Wikipedia)

Namby (Not In My Back Yard) is a label often placed on groups who resist change by those seeking to profit in some form from that change. The town does not have a Namby feel, see Leiston and Sizewell, instead it has an independently minded, considerate atmosphere, where people chew over options before deciding to agree or oppose. This is purely conjecture on my part.

If you are enjoying this Haphazard journey then please think of donating, this is presently a self-funded project. Thanks, John M